October 01, 2019
GHfind (and by extension Krobofind) is created to encourage virtually-instant contact between merchants and customers.  As such the site is designed in such a way whereas when a user conducts a search, a hyperlinked telephone number will appear.  On the webpage itself, the number will appear in its local format, as in a three-digit prefix followed by seven-digit number.  So let's take a look at the following hypothetical example:

024 would be the prefix, specifically in this case MTN Ghana.

In actuality, unlike other parts of the world, the number will not work unless you use the prefix (even if the caller is on the same network).  So you can say the entire 10 digits is actually the telephone number.  But the above example is how it would be dialed locally, if one person in Ghana were calling another.  If however someone from outside were calling, it would have to be formatted as so:

In other words the first digit (which is always a zero) is removed and replaced by the Ghana country-calling code, either in the form of 00233 or +233.

As such when you conduct a search on GHfind, telephone numbers that appear in the results will display in their local format.  But when you actually click them (in order to initiate the call on mobile devices), the number that will appear when calling (i.e. dial) will be the international format.  This way people from outside can call merchants just as conveniently as those inside, even though the appearance of the phone number when calling may appear cumbersome to some domestic users.

Before the convention was that the telephone numbers for smaller businesses were kept in the local format, while bigger businesses the international.  However using two different formats throughout was inefficient.  Moreover you never know what people outside of Ghana are interested in anyway.
Krobofind telephone numbers 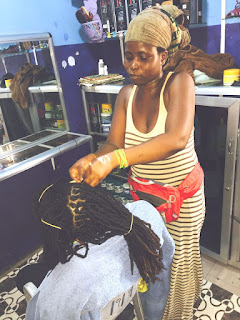